Hailing from her native Trinidad and Tobago, Author, Illustrator, and lifelong bibliophile D.H. Gibbs found a way to blend her creative abilities with her love of the written word.

From her early days, she spent many waking moments crafting tales, honing her graphic design skills, or dreaming up elaborate vacation plans to satisfy her love of exploring new locations. Her creative endeavors have afforded her many opportunities and inspired her to take her love of new and different worlds to craft Childrens’ and New Adult books for readers everywhere.

When not writing, she can be found dreaming up new, fantastical stories for her fans or indulging her love of art, reading, or planning her next great adventure.


Connect with the Author 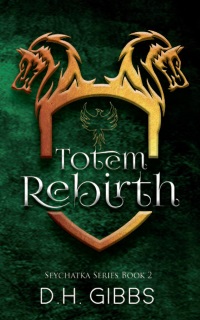 
The races collide as each Konstantinos royal has claimed a throne. Who will survive? Who will be left to pick up the pieces?


For decades Nika Konstantinos has been on the run; from a past that nearly destroyed her and the truth about her family. Now she has embraced her destiny and as queen of the Immortals, her first order of business must be to ensure the death of her twin brother.

Nikolaj Konstantinos has chosen to be the Alpha of the Totems for one reason and one reason only. To get revenge on the Immortals, that murdered his mother. Now that the truce between the races has ended he will stop at nothing to destroy the Immortals.

Friends are lost and gained as brother and sister face off. But there is more than war brewing on the island of Seychatka and when Nika’s past comes back to haunt her she struggles to keep the memories at bay. Will she be able to overcome this new obstacle or will it prove to much for her to survive?

Fans of Throne of Glass, A Shade of Vampire and the Red Queen series will surely enjoy the second installment of the Seychatka series.

Keep reading for an interview with Nikolaj Konstantinos, a character from the book: 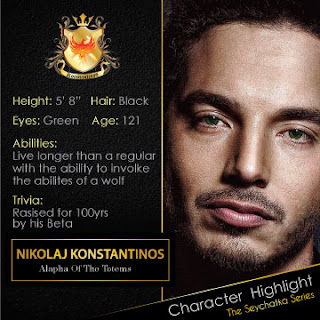 Where were you born, and what was it like growing up there?


I was born on the island of Seychatka growing up was a battle to prove myself stronger than everyone else.

Do you have a close relationship with your family?

What is the happiest memory from your childhood?

Who was your best friend growing up?


As alpha I have no friends. That would be a sign of weakness.

Who is your enemy?


The Immortals are my enemies because they murdered my mother.

Tell us a little about your world, and where you fit in?


In my world only the strongest survive. As Alpha of the Totems I shape the course of my people.

What are your goals?


I would like to destroy the murdering bastards that killed my mother and rule the immortal throne.

Who has been the greatest influence in your life?


My Beta. He is my second and has raise me from a young age. I...care for him.

Do you have a secret you've never told anyone?


Yes. I would give up my roll as Alpha if I could have my sister back. 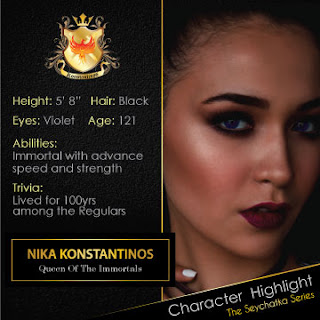 What kind of clothing do you prefer to wear?


I prefer to wear the Totems traditional leathers and our wrist guards because you never know when a subordinate will need to be reminded of their position.

What do you regret most in your life?


That I don't remember my mother. I believe if she were still alive my life would have been different.

If you could change something about yourself, what would it be?