Rumble lives, works and writes in the UK. Her first children's book was written after a hard day at work. She loves curling up with a good book and a hot chocolate on a cold afternoon.

Connect with the Author 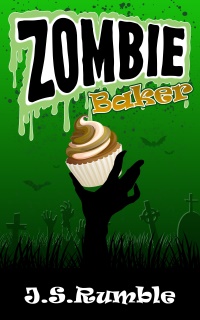 
Fred is one of those rare boys that actually likes going to school… well, he did until now. He started getting picked on for something he has no control over… being a zombie. Most people think of zombies as mindless creatures that roam the world searching for others to infect, in  that couldn’t be further from the truth. All Fred wants to do is bake! He dreams of opening his very own cake shop one day, but pastry school is extremely expensive! Then an opportunity comes along that could help his dreams become reality.

Keep reading for an excerpt:


Fred was more excited than he had ever been before. Today he was going to open his very own cake shop, something he had been dreaming about for years.

He got up early, laid a selection of beautiful cakes and pastries out, unlocked the door, and turned his sign over to show he was open for business.

It took a little longer for the first customer to come in  he had hoped, and much to his surprise, they ran out after only trying one cake sample. Not two minutes later the same person came back dragging two people with her. “Maisy, you have to try this,” she said, pushing her friend forwards.

Soon, more and more people turned up until there was no space left in the shop and they had to wait patiently outside for their turn.

Fred saw lots of people he knew and lots more that he didn’t, and was kept busy refilling the counters with all kinds of tasty treats for people to try and buy.

It was the middle of the afternoon when a reporter turned up and asked Fred if he could take some photographs for the local paper.

“Can we do a quick interview as well? The people will love to know your story.”

Fred laughed. “There is not much to know,” he said. “I have been very lucky, but none of this would have happened if I hadn’t been a zombie.”

Fred led the reporter to the side of the shop so they could both sit down.

The reporter set his camera on the table and took out a pen and a small writing pad.

Fred’s eyes glazed as memories of his childhood began to surface.


Most people think of zombies as mindless creatures that roam the world searching for others to infect. In fact, that couldn’t be further from the truth.

It was three o’clock in the morning and Fred lay in bed with his eyes wide open, staring with desperation at the ceiling. He was hoping that something miraculous would happen to stop him from having to go to  that day.

It wasn’t that he didn’t like school; he did, and up until the day before he had enjoyed learning during lessons and laughing with friends during break times. His  class was cookery and his dream was to open his very own cake shop. He knew it would take a lot of work because his family  quite poor but he was determined to try, so he worked hard at his lessons. The problem was that school wasn’t as much fun as it used to be because now he was being picked on, picked on for something he had no control over, picked on for being a zombie.
at May 02, 2018